Skip to content
Home/Artists/NEWS: 2021 dates confirmed for Lindisfarne
Previous Next 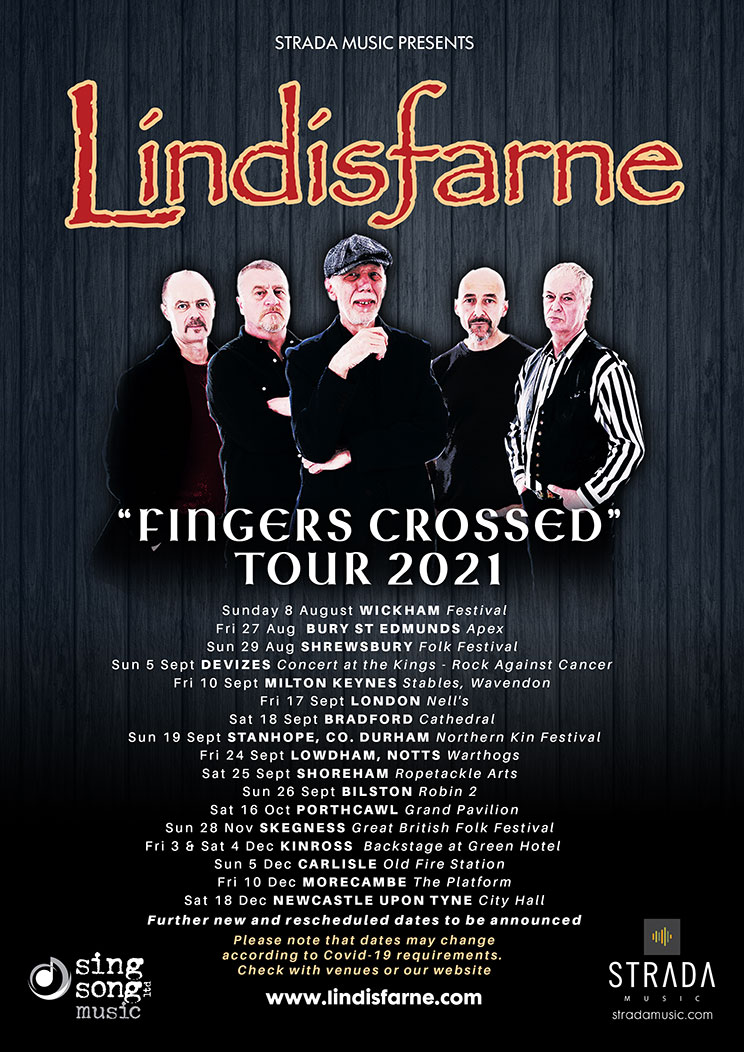 Acoustic rock music legends Lindisfarne have announced live performance dates for 2021 in what the band has jokingly dubbed the ‘Fingers Crossed Tour’.

Signing up for the summer to winter dates are 18 venues, from Kinross to Shoreham and Porthcawl to Skegness. In addition to first time appearances by the band at Bradford Cathedral and Lowdham’s Warthogs, the tour takes in many venues from last year’s 50th anniversary tour postponed by the pandemic.

The tour coincides with the production of a BBC TV documentary about band co-founder Alan Hull scheduled for airing this October (2021) to coincide with the 50th anniversary of the release of the band’s seminal album, ‘Fog on The Tyne’.

“Meet Me On The Corner”, “Lady Eleanor”, “Run For Home” and “Fog On The Tyne” are all songs that continue to resonate down the years and in the process slip into the very fabric of British culture.

But then Lindisfarne pretty much never went away and 50 years later continues entertaining crowds with an extensive repertoire of world-renowned songs delivered in the inimitably engaging way that has trademarked the band’s stage act right back to 1970.

That’s when band writers the late Alan Hull and Rod Clements emerged from Tyneside to quickly carve out a unique place for themselves fronting one of British rock’s most original bands.

Their pioneering sound, combining acoustic instruments like mandolin and fiddle with their electric blues roots, proved the perfect medium for their catchy, memorable songs.

The Clements-penned hit “Meet Me On The Corner” paved the way for their classic ‘Fog On The Tyne’ release to become the UK’s top-selling album of 1972.

Further acclaimed albums were to follow, buoyed up by powerful live performances. An accessible, unpretentious style bestowed them an enviable reputation as festival favourites, while the Lindisfarne annual Christmas concerts held in their native Newcastle became the stuff of legend.