“What’s going on with Deckchair Poets is sublimely executed and carefully crafted … if you like upbeat, clever, happy-happy pop-prog, give Deckchair Poets a whirl.”  Sea of Tranquility

Listen now on Spotify  via this link

A self-described “balmy bunch of dream weavers, who’ll sprinkle diamonds in your ears and paint rainbows in your mind”, Deckchair Poets are needed more than ever to part the Covid gloom and generally buck everybody up.

Skewing trademark lyrical humour to a diversity of music stylings spanning prog to rock ‘n’ roll, ‘The Crop Circlers’ Guide To Abstract Expressionism’ marks a return to the structures of Deckchair Poets’ first two albums, ‘Who Needs Pyjamas?’ and ‘Searchin’ for a Lemon Squeezer’ bringing along the exceptional talents of the band’s firecracker line-up.

What’s it all about, this time? “Selling out!” replies Lynden.

“It’s strange that only one reviewer to date has spotted the association with The Who’s great album, ‘Sell Out’ and our work,” he continues. “That was exactly what I had in mind when I put those two albums, and subsequently this one, together.

“They released some wonderfully whacky songs, and that album is riddled with them. “Mary Anne With The Shaky Hand”, “Odorono”, “Tattoo”, “Medac”, “Silas Stingy”, alongside such serious metal-work as “I Can See For Miles”.

Lynden points out that the true ‘sell out’ is about the inclusion of adverts, which riddle The Who’s  album, the majority borrowed from pirate broadcaster of the day, Radio London.

“John Entwistle, as well as supplying a few of the album’s brilliantly bonkers songs, came up with some gloriously daft adverts, too, including Heinz Baked Beans and Rotosound Strings,” says Lynden, who acknowledges that his band’s work is nothing like The Who’s.

“It’s just that a few tiddlers are thrown into our musical pond reminding me of Sell Out’s structure, and we do indulge in a Jamboree Bag of sensible and witty ditties.

“The writing of the short numbers was never planned. They just occurred, and I never felt any need to expand upon them. To me they act as a wake-up call to wandering minds – a ‘what happened there?’ moment.”

“Of our own compositions there’s mention of stupidly dressed dictators, a homophobic army sergeant, vicars’ alluring daughters, body odour, a longing for summer, a suicidal fly, and even an eye-watering tale of an accident with a zipper,” deadpans Lynden.

More on the band at  www.deckchairpoets.com 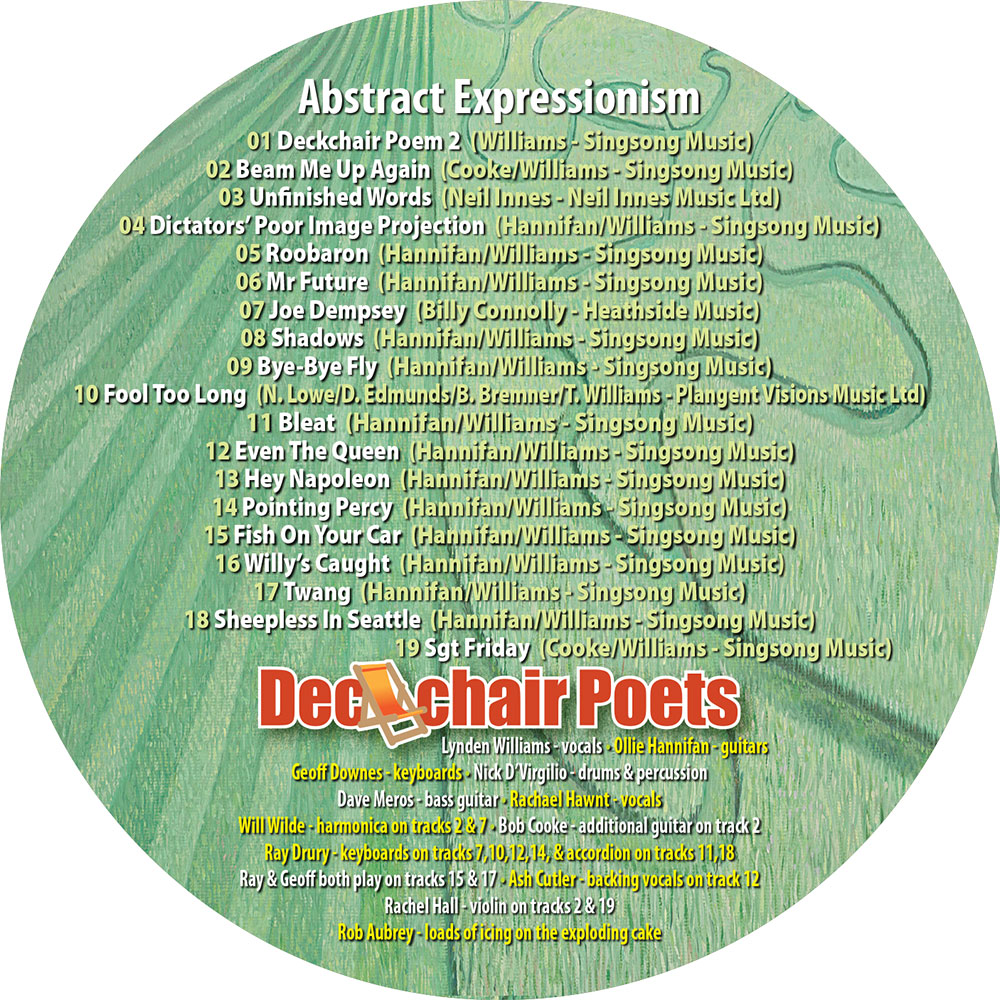