“…comes from fingers that you know from listening to have been playing an axe for considerably more than a half century, and a rare head on a guitarist’s shoulders that finds new twists when it comes to rock solidly-grounded in blues”.

That’s how former-US White House speechwriter Thomas McArdle sums up Chicagoan Joe Wright,  dubbed ‘Joe the Jammer’ by Jimmy Page and Robert Plant who, when he worked with them in Led Zeppelin’s energetic early years, noticed that he could seldom put down a guitar.

Joe went on to work with Jimi Hendrix and The Who and played with Paladin, Stealers Wheel and Mike Vernon’s Olympic Runners before joining forces with Procol Harum and Foghat veterans in the late 70s ‘super-group’ Nobody’s Business.

‘Invite Me Home’ is an action-packed EP’s worth of finely-honed Chicago rock and blues and it measures Jammer’s work to date and the company he’s been keeping very nicely, thank you.

Jammer’s songs, McArdle relates in his notes, represent “the kind of fare that should have been dominating the airwaves forty years ago … Jammer actually did live the Hyatt Riot House lifestyle, and arrived alive on the other end to live, tell, and sing about it.” 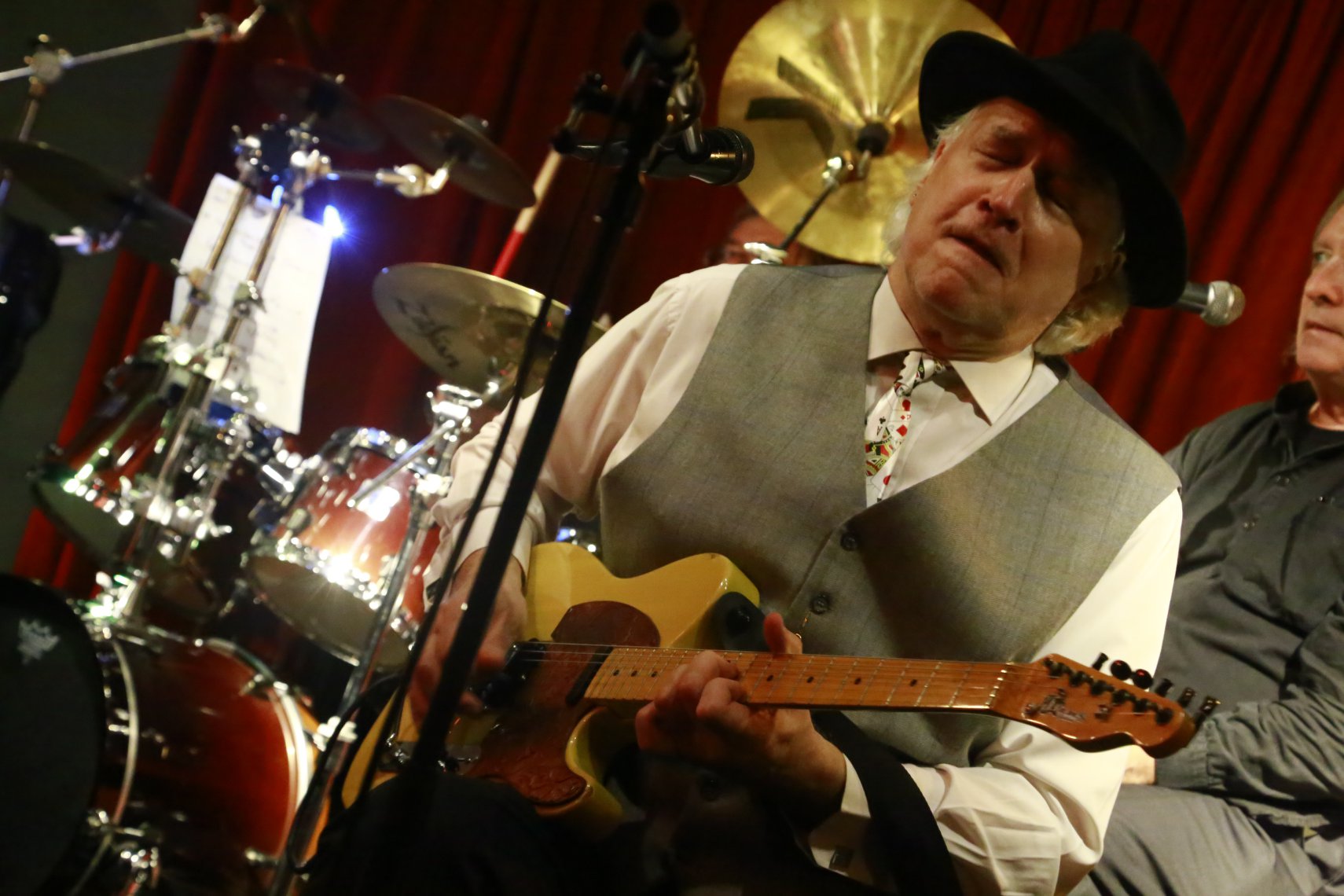 Alternate histories are all the rage today, like “Game of Thrones” re-imagining the Middle Ages, and the mini-series of Philip Dick’s tale of the Nazis and Imperial Japan dividing America between themselves after winning the Second World War in “Man in the High Castle.”

If you’d like to experience an alternate reality to substitute the rock and roll that bubbled up out of the drainpipe after the heavy blues golden age that included Led Zeppelin, the Rolling Stones and the Who, you’ll find it in this new offering from Chicago-bred Londoner Joe “Jammer” Wright.

Joe got his nickname from Robert Plant and Jimmy Page, for whom he was guitar tech in Zeppelin’s early, most energetic years, because he was always still playing after the musicians around him were worn out.

Post-Zep, he was in a string of hard rock and funk outfits, and would have replaced lead guitarist Joe Perry in Aerosmith but for Steven Tyler’s unwise veto of the other band members.

The five songs featured on this EP, with the Jammer in total creative control of production, are the kind of fare that should have been dominating the airwaves forty years ago instead of the faux Dylan vocalizings of Tom Petty, the mass-manufactured-in-the U.S.A. hits of Bruce Springsteen, and the unlistenable sham rock of John Mellncamp. Unlike so many successful fakers, the Jammer actually did live the Hyatt Riot House lifestyle, and arrived alive on the other end to live, tell, and sing about it.

For reasons not worth getting into, these tracks have been waiting a long time to be heard by the public, and they were actually mixed on the 11th of September, 2001, with a TV of the shocking, infuriating events of that day on in the studio. The resulting emotional electricity made its way through the soundboard into the final product.

“Invite Me Home” starts things off, and it’s got the same DNA as the sinister blues standard, “Good Morning Little School Girl,” especially Mississippi Fred McDowell’s slide acoustic guitar-heavy version. Joe’s got his foot on the wah-wah pedal here, and there are funk elements too. “You got a lovely pair of legs now, you got the sweetest little smile” is sung in a riff a little reminiscent of Rick James’ “Super Freak” – “That girl is pretty wild now” – but minus the comic absurdity that rendered it a borderline novelty song that makes people laugh more than dance.

Second is “Don’t Believe”, with a wall of sound that will make listeners recall late Zeppelin’s lengthy, keyboard-dominated “Carouselambra,” an offering that, despite being well played and sung, always felt labored and inauthentic. The sonic richness idea works better here as an accompaniment to rage. “Don’t you dare cross me again. Don’t you dare – you know I play to win.” That anger is revealed to be rooted in dealing with a loss. “Don’t think I didn’t want a second chance. Don’t think I didn’t want a romance.” It’s a track so much more interesting than most of the heavy rock of the seventies and almost all of it in the eighties.

“Please Don’t Knock” is a hangover song, and the reveler has learned his lesson – kind of. “I swear I’ll never get drunk again – until at least next weekend.” Here and elsewhere in the EP the lower register of the smooth female backing vocal is unusual and makes a good mix with Joe’s unmistakably American voice, which is kind of a South Side Windy City version of Rod Stewart.  You can imagine Rod singing the “oh!”s of the hangover headache in the middle of “Please Don’t Knock,” but with Joe it doesn’t come off as a glam pose.

“Build a Bridge” at first seems to be about moving on after a breakup, but we soon discover something much more touching. It’s actually a dose of inspiring fatherly advice to a young woman, reminding her that “You can climb a mountain if you only take the time” but that “You will always return to me.” This may be the heaviest track on the EP, with some satisfying phrasing from Joe’s Telecaster in the song’s second half. Yet it’s a tear jerker if not quite a ballad. It’s hard to think of an electric guitar-dominated group who could do anything like this without ending up sounding like the bubblegum music of REO Speedwagon.

The EP ends with “Better Not Stop”, a serving of slide guitar blues with a silver lining. “Every day I get the blues, yes it’s true. Every way I seem to lose – a little more. Everywhere I think of you, only you.” Listen for some unexpected acoustic rhythm guitar about half way in. The moral of the lyrics is when you’re walking down the street and you see me coming, you better not stop – because things are gonna happen.

Thanks to advanced computer technology in recent decades placing sound engineering techniques in the hands of anyone, masterful production is far more widely available today. And it’s found in abundance here, with the guitar and all the instruments sounding as if George Martin had been with Joe in Abbey Road Studios. Except hold on – every Tom, Dick or Harry armed with Garage Band software isn’t turning out music as listenable and comparable to the genre’s greats as Joe Jammer has recorded here.

So forget the woulda, coulda, shoulda. Just turn it up!